If you are an avid follower of health TV channels and social media handles, chances are that you already know what Plexaderm is.

The kind of hype that this product has generated is second to none.

Their TV programs and adverts usually feature models with visible eye bags. What surprises many is that those eye bags seem to disappear immediately after application of the Plexaderm serum.

… And not only that, but we are led to believe that all of those results happen in as little as 10 minutes.

We can tell you one thing is for sure.. The team behind the Plexaderm brand are great marketers and they know just how to play on your emotions. 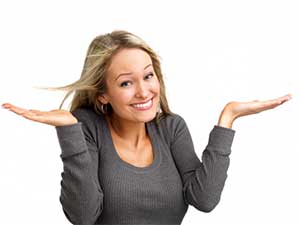 After all, which woman doesn’t want a flawless and ageless skin?

Can you imagine just rubbing a little serum on your face and have all your wrinkles and blemishes disappear within minutes?

That would be fantastic right?

Well, since that’s what you’d be led to believe after seeing those TV commercials, it is very important to get to the bottom of it and find out the truth.

Because, that’s as far as live TV can go.

We have heard of cases where paid programs hyped underwhelming products at the peril of innocent viewers who believed the unbelievable.

We are not saying that this is what the creators of the Plexaderm brand is doing.

That is why we want to explore this product to clear up any misconceptions and give you the 100% truth so that you can decide for yourself if this it is worth your time.

So the following question arise:

These are some questions that we will address below in this 100% unbiased Plexaderm review.

As you may or may not know, this product is not cheap. One month’s supply will set you back $59 so you must be sure if this is something that is right for you before you make a leap.

With That Said, Continue Reading Below To Learn More…

Plexaderm Reviews – Does It Really Work In Just 10 Minutes Or Is It HYPE? 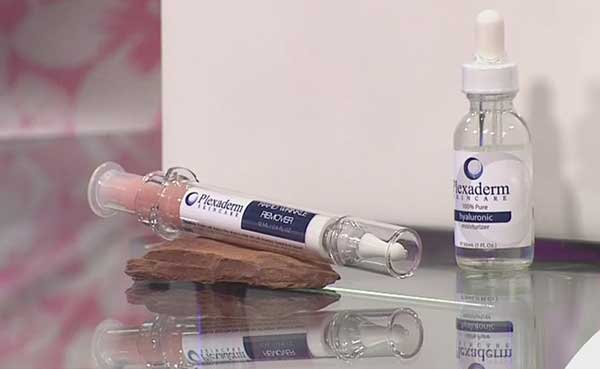 Plexaderm is a serum or what is generally known as skincare cream. One of the outstanding messages that it’s marketers push is that it works within just minutes of application.

The manufacturer however fails to give a detailed guide as to how this anti-aging product works.

Many leading cosmetics companies are known to go to great lengths just to explain these important aspects of their products.

Some even provide detailed graphics and visualizations.

The creator of this famed product ‘Plexaderm’ however seems to rely more on before and after messages, as well as demonstrations from own models on TV stations.

Taking a closer look at its mechanism of operation, we note that the way it works could have something to do with silicate ingredients.

Silicates are minerals obtained from rocks. They are nothing new in the skin care world; in fact, they have been used for many years by dermatologists.

Once you apply Plexaderm into your skin, the cream immediately begins to dry.

This forms a thin film on the outer-most layer of your skin which then tightens things up. This can, to some extent, explain the near magical disappearance of eye bags after Plexaderm is applied.

Plexaderm goes a step further and maintains that you don’t have to go to great lengths to have a youthful looking skin because as some reviewers put it “the cream will do the job for you.”

It’s a fact that aging is a part of life.

And as we age, wrinkles, sagging skin and fine lines become an issue. This product seems to aim at fulfilling the need to keep the skin looking young without the need for injections or surgeries.

A further claim added to make even more sales is that the cream can help you achieve professional quality results from your home. Now that sounds like a tall claim that needs to be verified.

Perhaps a closer look at some Plexaderm ingredients will help us understand if this potion is just another overrated gimmick.

How Did This Popular Skincare Product Came About? 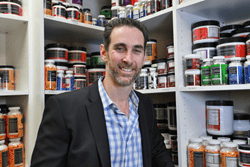 If you head over to the official website, there’s currently a video on the sales page (at the time of updating this review).

This video has a very emotional video from the CEO of Plexaderm, Jonathan Greenhut.

In the video, Jon explains that this cream almost never made it to the spotlight.

He explains that he had received a formula from a doctor but due to his skepticism he never believed that it would work. As a result the he placed the cream in his drawer and it stood in there for over a year.

He further explains that having found the cream a year later, he decided to give it a chance.

The current CFO of the company who goes by the name Mike S had terrible eye bags and would make the perfect guinea pig for the serum.

This was where things started to take off.

Mike decided to put the serum (at that time it wasn’t called Plexaderm as yet) to the test.

What shocked everyone was that the cream worked in minutes after being applied.

That’s when they realized that they had something groundbreaking that could really benefit a lot of persons all over the world.

See image below for the below and after results of Mike as taken from the official website. 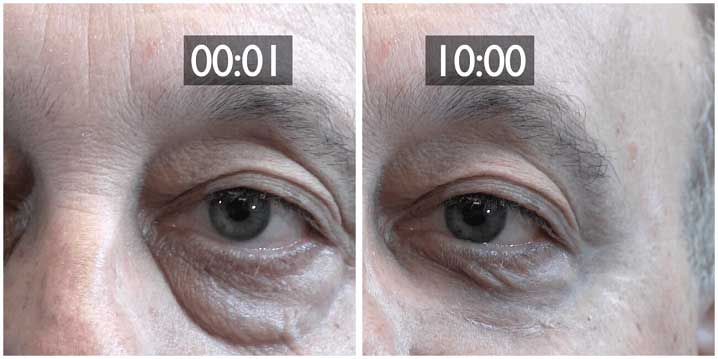 The cream/serum was then further analyzed and put through a clinical trial and amazingly, test results were positive.

But what makes Plexaderm work so well and are the results permanent?

A Look At Some Plexaderm Ingredients

This is an inorganic salt that is quite common in cosmetic products.

Its main role is to enhance pH balance and prevent general wear of skin cells. This ingredient, though inorganic, is generally considered safe.

This is a natural element that is obtained from clay.

It is mainly used to thicken the product and to improve its stickiness. Used in small amounts, it is generally safe.

This is yet another inorganic ingredient that seems to do the magic in Plexaderm.

Its job is to enhance absorption of other useful ingredients in the formula. It also comes in handy as a colorant which is in addition to the fact that it creates reflective effects.

This is a natural agent that is known for its exceptional abilities to moisturize the skin.

Hylauronic Acid is probably the game-changer if this skin cream because besides restoring water content in your skin cells, it heals damaged parts of the skin as well.

Another thing is that it enhances your skin elasticity and restores youthfulness by filling gaps between elastic and collagen.

This is an alcohol-based ingredient that is sometimes found in fragrances.

Used excessively, it can cause an irritation. But used in small quantities, it works effectively as a germicide and preservative.

This natural preservative plays an important role in conditioning the skin.

Although it is generally considered safe, it can cause irritation in some individuals.

What Are Online Plexaderm Reviews Saying About The Product?

Opinion about this product are somewhat mixed.

It gets difficult to reconcile facts given the company solely relies on before and after photos to market.

While the photos look stunning, there is need for the manufacturer to tone down on the hype and focus on communicating tangible information.

Already there are some reviewers who have complained about skin irritation that borders on a stinging sensation.

This could be due to the presence of silicates which are alkaline in nature.

The product’s packaging is also not at its best.

Their current dispenser is quite uneconomical as you end up using more quantity than necessary. This could be a strategy by the company to ensure people keep buying more often.

That’s just an opinion though – but we genuinely think they should do something about this.

Using a tube dispenser would solve this issue.

Surprisingly despite the sheer number of flaws, this product still seems to attract high ratings from its customers.

Below is a sample of Plexaderm reviews we found while conducting our research. These were found on forums or on comments on popular blogs.

It is our opinion that these are genuine comments from real people. And while the sample size is not large enough to make a firm conclusion, it’s an indication that most people are loving the product.

1. This review is from a gentleman who has some really serious eye-bags.

He bought the product and did a demonstration of him applying the cream while timing himself. (Click ‘Play‘ below to see his results)

2. This is another video review from Pati a YouTuber who posted a video of herself using the cream.

She said she had been seeing the TV commercials for sometime and finally gave in to try it.

Now see is a believer. (Click ‘Play‘ Below to see her results.)

3. Here is Liz who also didn’t believe the TV commercials until she tried the product for herself.

Other reviews found around the web….

“It reduced bags from under my eyes, just as it said it would”Tish V
“I am not sure the product made me happy but at the present time I am fully satisfied with the product.”Leah W
“The puffiness is a little better, but what I really noticed is the redness under eyes had faded a lot after the application.

My under eyes aren’t particularly puffy, but starting to slightly sag and are dark colored. I’m hoping it will help with the color tone as well as the lines.”Stacey

“It works for a few hours. Unfortunately the supply did not last as long as I anticipated.”Ron B
.. It doesn’t last. As soon as you apply concealer, make up, touch your eyes in any way, everything comes back, the puff comes back… Doesn’t last.  Suzie Wong

What Are Some Of The Pros And Cons To Using The Plexaderm Cream?

Based on all the reviews we found, its clear that the opinions of customers are mixed.

Some people loved the product and some were clearly not happy with it. So below are the pros and cons to buying and using this cream.

The Final Verdict On Plexaderm

If you are looking for a quick fix to diminish your eye bags for a few hours then Plexaderm may be one of the top solutions currently on the market.

It gets quite a number of positive reviews from past customers but it also has a few drawbacks.

Please revisit the pros and cons above and then decide if its right for you. In our opinion, there are better alternatives which will give you a more lasting effect than Plexaderm. 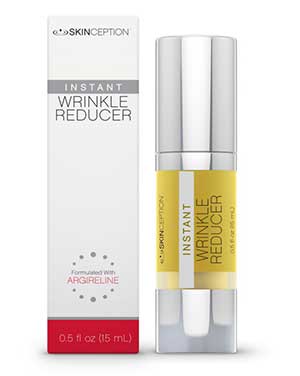 Commonly referred to as ‘Botox in a bottle‘ this formula can help you diminish fine lines, eye-bags and wrinkles in minutes.

The up side to using this product VS Plexaderm is that the results are more lasting.

It is a topical cream with a peptide found in Botox, called Argireline, which hydrates the skin and temporarily stops wrinkles from forming.

Here’s what you can expect from using Instant Wrinkle Reducer:

Instant Wrinkle Reducer might just be the best anti-aging product you ever buy.

It’s quick, effective and you’ve got 90 days to try the product and get your money back if you’re not happy.

PS. Comment below and let us know if you have tried either Plexaderm or Instant Wrinkle Reducer and what was/is your results using it! 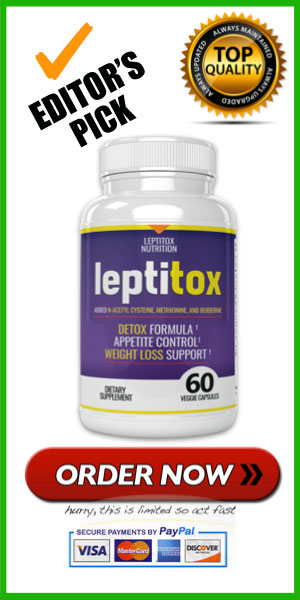 FlavaHealth.com is a participant in the Amazon Services LLC Associates Program and various other affiliate programs. It means that sometimes we get a commission through purchases made after clicking links on our website.

Scroll back to top